Sports betting in Australia is a massive business, with billions of dollars wagered legally every year. The most popular sports to bet on include AFL, NRL, football, basketball and of course, horse racing, which is a large percentage of the total take at Australian bookmakers.

Australians are able to bet on basically anything at bookmakers, but there are definitely some sports and events that attract greater interest. These include the AFL, NRL and A-League, which are the top flight leagues in their respective sports. The most popular sports competitions to bet on in Australia include:

The Australian Football League is an Aussie Rules competition that features 18 teams dotted right around the country. The AFL is a domestic sport in Australia that was originally created by railway workers over 100 years ago as a way to warm up on cold days.

Now the AFL is barely recognisable and is often played in front of crowds of upwards of 80,000 people. The sport itself is a full contact competition and regularly sees players get injured in a variety of ways. Methods of scoring include goals and points and there are 18 players from each team on the field at any given time.

AFL betting is exceptionally popular in Victoria, Western Australia and South Australia, but it has continued to gain a foothold in rugby league dominated states like Queensland and NSW. Betting sites will have markets available all year round on the AFL, including odds for awards like the Brownlow Medal, Rising Star and Coleman Medal.

The reigning champions are Richmond, who have won three out of the last four premierships, but were struggling in the early stages of the 2021 season.

Our team of wagering hounds write AFL betting tips articles on many of the top matches that happen during the season, including all finals.

The NRL, or National Rugby League, is the no.1 rugby league competition in Australia and is largely based in the northern states of NSW and Queensland, although there is one Victorian and an ACT team in the mix. There is also a team based in New Zealand.

Rugby League is probably the second most popular football code in Australia, with it shading rugby union in terms of fanbase. It also draws huge betting interest in Queensland and NSW, particularly when the State of Origin, played between these two states is on.

League is played on a rectangular field between two teams of 13 players, with the goal essentially to take the ball over the try-line. The kicker will then have an opportunity to add a further two points to the score with this known as a conversion. Teams can also score field goals, which is when the kicker drop kicks the ball through the goals.

Australian sports betting sites have got extensive markets on the NRL, including the ability to place same-game multis, futures markets (for things like the Dally M Medal and premiership winner) and match day markets on things like winner, try scorers and tackles.

The NBL or National Basketball League is the pinnacle of basketball in Australia, with this competition having featured some of the top basketball players in the world. In recent years NBA draftees like LaMelo Ball have used the NBL as a launching pad prior to their big-stage debut.

The NBL has also fostered some incredible Australian talent, which dates back a long time, including NBL title winner Luc Longley, who was the starting centre next to Michael Jordan at Chicago during their title winning days. Other older NBL stars include Andrew Gaze and Shane Heal, who famously took it right up to the Dream Team at the Olympics.

NBL betting is done all year round, but heats up during the summer months, with the season generally beginning in October and running through to the start of June the following year. This schedule has been interrupted by the covid pandemic this year, but the games have gone on.

Popular all-year-round betting markets include NBL Champions (title winner), MVP (both league and team MVPs) and things like first coach to be sacked. Match day markets include head to head, top point scorers, rebounds and many other markets.

There is presently nine teams in the NBL, with eight of these in Australia and one in New Zealand. The 2020-21 and defending champions are the Perth Wildcats, who won their 10th title in the competitions history. They are the most winningest team in Australian basketball.

The A-League is the no.1 soccer competition to bet on in Australia, with it running from October to May each year. A League betting can be done at all Australian sports bookmakers, with these including the TAB and giants like Sportsbet and Ladbrokes.

Soccer betting is one of the most popular sports leagues Australians bet on, although the weight of money wagered is probably lower than competitions like the EPL, which is massive down under. Aussies have the option of betting on on the outright winner of the A-League each year, while match day markets are extensive.

Sydney FC won the 2020 A-League grand final, which was the fifth time they have been crowned champions. other teams to win the league in recent years include Adelaide Strikers and Melbourne Victory.

Undoubtedly the A-League is one of the most popular sports betting mediums down under.

The Big Bash League is Australia’s top T20 competition, with it running over several months in the summer. The BBL has copped flack in recent times because of its extended format and inability to attract star players, but it is undoubtedly one of the most professional competitions in the world.

BBL betting is also extremely popular, with thousands of markets available on every match, including things like winner, top run scorer, top wicket taker and even novelties, like whether anyone will be caught behind square leg. Basically, T20 cricket is the perfect medium for sports betting, with lots of odds available and short matches.

Australian sports betting bookies will also feature extensive markets on a range of futures markets. These include things like the winner of the BBL final, who will make the finals, what players will make most runs for tournament and top wicket taker for tournament.

The BBL has featured some of the finest cricketers the world has seen since its inception in 2011, including spin great Shane Warne, Universe Boss Chris Gayle and champion all-rounder Jacques Kallis. Cricket fans in Australia are crying out for players of this calibre to again come out to Australia.

What sports do Australians bet on most?

The diversity of sports the staff at the World Gambling List bet on is breathtaking. If our attention is not on the NBA in North America, we’re probably finding a winner in the English Premier League or doing our money on the races at Royal Ascot.

While we will have individual pages for all the major and marginal betting sports around the world in time, here are a few of the most popular leagues and events on which online bookmakers offer wagering.

How to bet on sports online from Australia

In this section of our Australian online sports betting guide, we will run you through the steps required to successfully wager on local or international sports.

Sports betting is not slowing down in Australia and the market place of bookies is becoming more-and-more competitive as time goes by. This means there are constantly sports betting sites launching with the ones we currently endorse being: 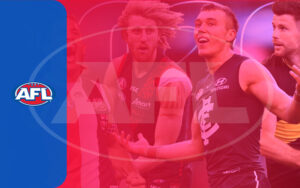 AFL round 7 fixture and odds update 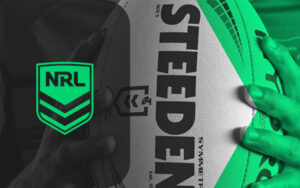 If you are serious about making a profit betting on sport there are some things you can do to maximize your chances. While there is always an element of luck involved when it comes to gambling, you can enhance your chances by following these betting tips.

The sports betting industry in Australia is a minefield of contradictions and poses many questions. If you have any queries you can email us at contact@worldgamblinglist.com and we’ll answer the question here.

What odds are used to display on Australian bookmakers?

All of the top betting sites in Australia display their odds in decimal format, which is the standard in this country. Other odds types used around the world include American and Fractional.

Yes, as long as you bet with an Australian bookmaker, online sports betting is 100% legal.

What other forms of gambling are legal in Australia?

Many forms of online gambling in Australia are restricted under the IGA, with these including online casinos, online poker and offshore online sports betting sites.