MelBet is an online bookmaker that has quickly become a favourite in a number of countries. This MelBet.com review will highlight the sports betting, horse racing, online casino and other features of this Curacao licensed gambling site. Our MelBet review will also extensively cover the MelBet bonus offers and MelBet promotions up for grabs in 2021. Use our quick links to navigate around our MelBet review. 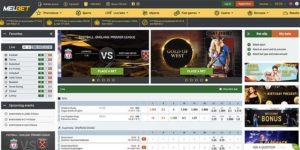 Obviously the no.1 sport in India is cricket, and we’re impressed with the selection of match betting at MelBet.com, including head to head bets and over/under markets. Surprisingly on things like the Indian Premier League and the Big Bash League there are betting options such as first ball of the match and what will happen on it; for instance the options might include odds of 25/1 for a wicket to fall, or 1.50 for a single and so on. Other things that interest us in the cricket betting section at MelBet include the fact you can bet on many competitions after they are underway.

US sports such as the basketball (NBA and NCAA), American Football (NHL and NCAA) and even ice hockey (NHL) are covered extensively at MelBet. Things like head to head betting, handicap betting, over/under markets on various statistics are all available.

Other sports betting markets covered well at MelBet include football (the round ball type), field hockey and table tennis. Rest assured that if you are interested in an International sport, or even most domestic sports.

If we had to pinpoint something disappointing about the MelBet sports betting offering, is that right across the board there are no player markets in team sports. For instance a common feature at UK betting sites is the ability to bet on things like the highest point-scorer in basketball, while at MelBet this is not available.

MelBet’s horse racing offering is a beautiful thing, with markets for all the major races from around the world, including Australia, New Zealand, USA, United Kingdom, Japan, India and South Africa.

Another thing that impresses us about the MelBet sports betting offering, is that they have a huge array of ante-post markets on the gallops. This means that by and large, any group races that are happening around the world have odds for the winner months from the running.

Race day betting markets include the ability to place win/place bets, quinellas, trifectas and even multi-bets across different races.

The same goes for the two other major racing codes at MelBet, with both greyhound racing and harness racing extensively covered right around the globe.

One disappointing aspect about the horse racing section at MelBet is that after races have been run it can become confusing as to where the racing is up to for the day and what is completed. With a little bit of work the bugs can be ironed out of the racing section at this online bookmaker. 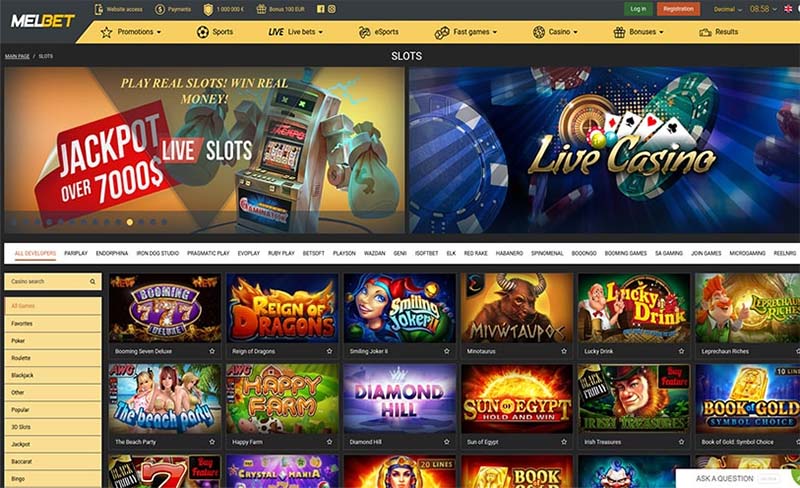 Our Melbet Casino review will run you through everything you need to know about this online gambling site, including its slots, poker and live dealer options.

MelBet.com Casino features over 1000 real money slots games, putting them at the higher-end for number of games. MelBet Casino uses over 40 different games providers to power their slots selection including some of the big names such as Betsoft and Rival.

Another cool feature with MelBet’s slots are the “live slots” which essentially allow you to play machines in a casino, rather than the online version. While we haven’t experimented too much with live slots yet, we did find the girl playing with our money to be very pretty.

Unfortunately because of MelBet’s Curacao license you wont’ find games from the likes Microgaming and Platyech.

The tables games section of the MelBet Casino is spearhead by live dealer, with six or seven different providers, including Ezugi (which is rarely seen these days), Evolution Gaming and Gameplay.

Another feature of the MelBet Casino is that there a stack of unique gambling games, including live versions of Bingo and Keno, which can have huge jackpots.

While MelBet’s Casino is not as reputable as other online gambling sites, we found the selection of games dwarfs many of them and the fact we got paid out quickly was another big plus.

Terms: Minimum deposit 110INR. Bonus must be rolled over 5 times in Accumulator bets. Must complete membership and turnover requirements before withdrawing.

Place a 650INR bet and you will be credited with a 2150INR Free Bet, which is over triple your original deposit. It is important to note that when talking about MelBet Freebet they have the right to cancel your free bet if you abuse the system and it can’t be used in conjunction with any other offers.

T’s and C’s: To qualify must deposit at least 650INR and place bet on odds greater than or equal to 1.50. You must also at least place a bet equal to the amount deposited.

MelBet has a swag of ongoing promotions, with plenty of these centring around the Indian market. MelBet’s promotions generally come with wagering requirements, but as far as online gambling sites go they are not too bad.

Place 100 bets in a 30 day period and a bonus bet of the average amount of your bets will be credited to your account. The 100 bets in 30 days promotions is available in many jurisdictions, with your eligibility to receive it depending

MelBet VIP Program is essentially a cash back deal, where you can move up and down tiers, depending on how active you are at the casino. There are eight different levels, with players starting at level 1 (copper). The more you play, the more cash you will get back as MelBet bonus. Another cool feature of the MelBet VIP program is that it doesn’t matter if you win or lose, the cash back is calculated on the bets placed. To be included in the MelBet VIP program you need to be approved, which can be done via talking to customer service.

MelBet is accessible via mobile and the company’s instant-play website, plus they have downloadable apps for both iOS and Android smartphones and tablets.

We’ll talk about the MelBet apps in a minute, but firstly the mobile Melbet site is easy to navigate and has plenty of options for both sports bettors and casino players.

Firstly the sports betting options we saw on desktop are all available on mobile, including horse racing, which is an important feature for this reviewer, given we often punt on the thoroughbreds on the way to work.

Like on desktop it’s possible to accumulate your bets, to create multibets, parlays or whatever else is on the menu for a particular event. This is done at the bet slip, where you also add in your stake.

The MelBet casino is also well-honed on mobile, which means you can play 100s of real money slots, plus plenty of RNG table games and skill games that adapt beautifully to smartphones and tablets.

MelBet does have an iOS app available to download, but there is a catch. You will need to change your Apple store’s settings to Cyprus to download it. Having said this, we did manage to change our phone back to New Zealand after doing so, and the MelBet iPhone app still worked.

The MelBet Android app can be downloaded directly from the betting company. This might seem strange, but this is common for Android users, who have the ability to download non-market apps. This simply means that the MelBet app is not in the Google Play store.

MelBet has got a broad range of deposit options available, with these suiting many different geographies. MelBet’s payment options differ in how long they take take to hit your account, although as a general rule things like credit and debit cards, web wallets and payment processors are instant. The full list of deposit options at Melbet.com:

MelBet is licensed by the Government of Curacao, which is hardly a reputable body in world gambling. Having said this, we judge betting sites on their reputation when talking about a business that operates in grey markets, and MelBet.com has passed all the tests we threw at it.

MelBet has got offices in Curacao, Cyprus and Russia.

MelBet Customer Service is available via several different methods and we’re happy to report all seemed to be well manned and responding to questions, which is a good sign when betting online, particularly at a Curacao licensed gambling site.

Our Melbet review was written from a place of serious caution, given it’s ties to 1xBet, but in all seriousness they proved us wrong. We bet happily on horse racing and several sporting events, walked away a few dollars richer after burning a few dollars in the casino. I am in New Zealand and the withdrawal took about four days, which is to be expected given we cashed out via bank transfer. A word of warning, if you want to take advantage of the MelBet bonus offers or MelBet promotions, be sure to read the t’s and c’s of each deal, because they can vary greatly from offer to offer.

Worst bookie i’ve ever seen. Easy to open account, but impossible to withdraw money. They even do not allow you to close your account. Absolutely SCAM.