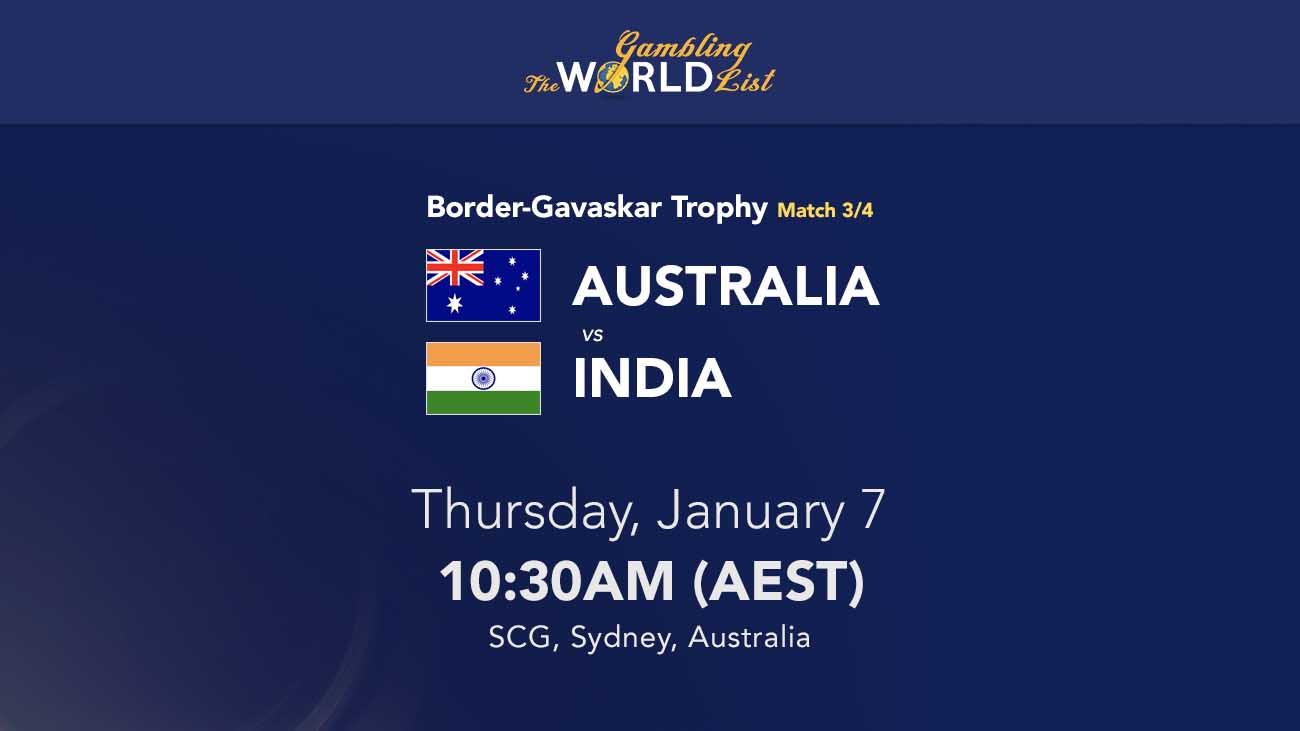 Welcome to our Australia v India betting tips, prediction and odds update ahead of the third Test being played at the SCG from Thursday.

The gritty Indians willed themselves to 1-1 after largely being written off when they lost the first Test and then lost captain Virat Kohli, who returned home for the birth of his first child.

The gutsy performance was spearheaded by stand-in captain Ajinkya Rahane, who made an important first innings century, and their talented bowling attack, spearheaded by Jasprit Bumrah.

Australia’s batting once again let them down, but it was their fielding performance that ultimately cost them the match, with several important catches going down.

The Aussies are likely to swing several changes to their line-up, including opener Joe Burns who is already dropped, with David Warner and Will Pucovski recalled to the squad following injury.

While Warner will slot straight back into the top order for Burns, selectors could also opt to include Pucovski and slide Matthew Wade down the order, with out-of-form Travis Head the player who could face the axe.

India have suffered an injury blow with Umesh Yadav suffering a side strain on day 3 of the second Border-Gavaskar Test and being ruled out of the series. Left-arm pace bowler Thangarasu Natarajan was added to the squad and it’s likely to come down to him or Shardul Thakur as the replacement for Yadav.

Rohit Sharma has also completed his quarantine period and could bolster the Indian batting line-up, which has hardly set the world on fire, despite levelling the series in Melbourne.

The clash will be played under strict bio-security measures with just 25% of the total capacity of the Sydney ground used because of the latest Covid-19 outbreak in NSW.

Australia are priced at $1.66 to win this clash, while India are outsiders at $3.75 and the draw is paying $5. There is plenty of rain about in Sydney over the next week, which makes the draw an attractive proposition.

Continue reading for our free Australia v India tips for the third Border-Gavaskar Test being played at the SCG from 10.30am on Thursday.

Our cricket betting expert has cast his eye over the markets and found some value Australia v India tips for the third Test.

Steve Smith to top-score for Australia

The former Australian captain has had a horror start to the Test summer, after blitzing the white ball games, and we think he can respond here. We figure he’s too good to not get a score eventually and this time he will have  Warner and either Marcus Harris or Will Pucovski to hopefully shield him for longer against the new ball. He is paying $4 to top-score with Unibet Australia.

Nathan Lyon to take most wickets in India’s second innings

Sydney is traditionally spin-friendly and Lyon is regarded as the GOAT of offies down under, and he will need to bowl well to trouble the best players of spin in the world. But we think he is certainly good enough and will be paying around the $5 mark to take most wickets in the Indians’ second dig.

Jasprit Bumrah to take most wickets in Australia’s first innings

India’s #1 pace bowler Jasprit Bumrah did the job for us in the Aussies’ opening knock in Melbourne and we see no reason not to stick with him here. He simply troubles all the Australian bats and we can’t see it changing on a green deck in Sydney.

David Warner is a huge inclusion for the Australians and we think it might be enough to tilt the series back in their favour. The big concern here is whether rain is going to cause interference in the outcome, which is a real possibility. The one thing telling us there is likely to be a result is both teams’ struggles with the bat throughout this series, which suggest if we can get in three and a half days play we will go close to having a winner. Our final Australia v India prediction? Aussies by five wickets.